XRP leads the monthly chart in earnings of the top 20 cryptocurrencies with 159%. In that period, only XLM comes close to similar gains at 137%. However, transaction monitors have begun to record an increase in XRP whale activity that should put investors on guard.

According to Whale Alert monitor, about $352 million in XRP has been moved in the last day. Two of the largest transactions moved about $120 million between two unknown wallets. In addition, Whale Alert recorded a $75 million or 116 million XRP transaction from the Ripple Genesis wallet to an unknown wallet.

The most important increase in XRP whale activity has been towards crypto exchanges. Whale Alert indicates that over $144 million has moved to Binance, Coinbase, Bybit, and other platforms in the last week. This could indicate that big investors are preparing to sell XRP soon.

Ripple has also moved funds from its escrow. Ripple has moved 1 billion XRP in two different transactions of 500 million XRP. In total, the company has made transactions worth nearly $654 million. This is done by the company every month as part of its financing. 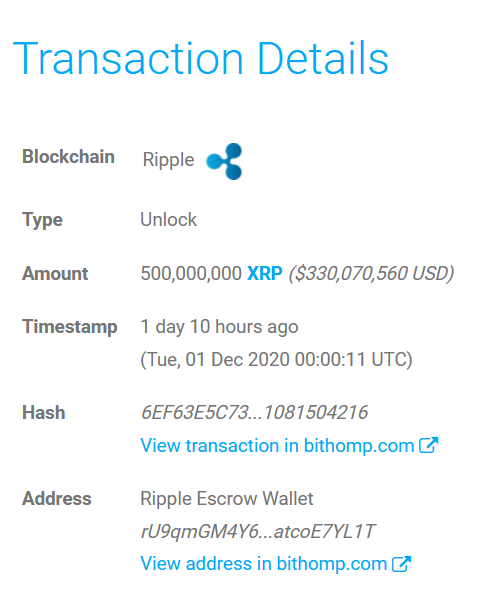 Jed McCaleb, one of the 3 original architects of the XRPL along with David Schwartz and Arthur Britto, has over 3.8 billion XRPs. According to an agreement signed with Ripple, McCaleb is allowed to sell his funds at a certain rate. The rate of sale is currently at an all-time high.

According to Leonidas Hadjiloizou, this is because the trading volume in XRP has increased. As a result, the percentage of the digital asset that McCaleb can put on the market is increasing. At the end of November, Ripple’s co-founder sold nearly 9.9 million XRPs in one day, as shown below. 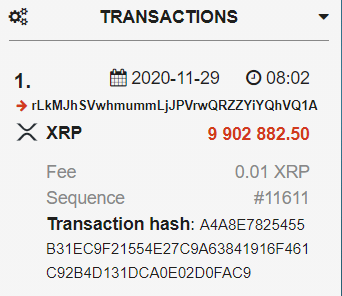 It is estimated that if McCaleb’s sales pace continues, Ripple’s co-founder will run out of funds in XRP in about a year. Leonidas Hadjiloizou adds the following:

Bear in mind that according to the deal between Jed and Ripple, the amount he sells changes every week (every Sunday). This means that for each of the next 6 days he will be selling this amount.

In the XRP community, the referred sales have been accused of negatively impacting the price of the digital asset XRP. Now that there seems to be an upward trend, some users have been concerned about how this could affect their investment. However, trader Credible Crypto indicated that McCaleb’s sales will not affect the market:

Doesn’t change anything. The amount being sold is a small % of daily volume- purposely done this way so it doesn’t have a major effect on price.

Credible Crypto has been one of the most bullish traders and analysts on XRP. As reported by CNF, the trader expects the digital asset to approach its all-time high in the next bullish cycle. Therefore, XRP could be in the $25 to $30 range.

Ripple Price Forecast: XRP getting ready for a 50% upswing as consolidation hits the elastic limit