With the controversy and confusion surrounding cryptocurrencies, it is easy to forget that there is nothing inherently illegal in them. Tom Robinson, co-founder and chief data officer at Elliptic, says: “It is true the reputation at the moment is that cryptocurrency is the payment means of choice for scammers, terrorists and criminals. But we have to put this into perspective. The biggest use is speculation.”

If the reputation of cryptocurrency is to change then it needs to go beyond regulation and build systems with integrity which consumers and professionals can have confidence in and trust.

Regulation and monitoring the professional players is certainly part of building this reputation. Dr Robinson says: “Changing the reputation will come by having good regulation and ensuring every issuer is doing good due diligence.” The biggest problem for law enforcement is the many unregulated exchanges, where criminal users can stealthily navigate their way through the crowd of legitimate transactions. US Securities and Exchange Commission chairman Jay Clayton recently called out the “gatekeepers”, such as exchanges, bankers and lawyers, among the bad actors in initial coin offerings.

If change is to come, Dr Andrei Kirilenko, director of the Centre for Global Finance and Technology at Imperial College Business School in London, says: “There are two scenarios; a negative and a positive one. The negative one is where a very large global bank is hacked and so people can no longer say a bank is any safer than cryptocurrency. The positive is that crypto becomes a regulated asset class which attracts serious investors.”

The future of cryptocurrency means accepting there will always be abuses

Like any market handling money, cryptocurrency will always attract scammers and the like, but most users should have the confidence that this is a safe and useful space for them to occupy. It is said every US dollar note has drug residue on it, but this does not make everyone handling US currency drug-runners. It is this level of understanding that cryptocurrency is striving for, which means accepting there will always be abuses. What reputation in finance amounts to is robust integrity and confidence in the means with low negative impact on the consumer.

The foundational work for building such a reputation is one for IT specialists and forensic crime experts. Cryptocurrency uses technology to transfer value outside the institutional financial system. Criminals were early-adopters of bitcoin because they believed digital currencies were untraceable and completely anonymous. To sign up in the cryptocurrency world is easy, you simply need an address using a random string of letters and numbers, and you can have as many addresses as you wish. These addresses can be tied together without having to identify their provenance. The funds involved can be transferred without intermediaries and across jurisdictions with ease.

The foundational element of the blockchain structure is the cryptographic protocol that chains data together without which you have no blockchain. The structure of blockchain then creates the barriers for forensics, but they are also the means towards detection. Dr Kirilenko says: “Blockchain is public; anyone can see the balances at all times. They don’t know who it is, but they can see it. This is an interesting reversal. We usually know little about the balances of others. Because you can see the chain, you can do profiling exercises, look at certain profiles and link them together.”

Away from all the headlines and hype, the reality is that cryptocurrency networks are less private than criminals thought. In fact, crypto offers pseudonymity rather than anonymity. Dr Robinson explains: “There is a pseudonym, but this can be ultimately tied to a real-world identity.” Forensic investigators are able to trace illegal behaviour and misconduct by using a range of new forensic tools, detecting patterns across cryptocurrency networks  and, as the old adage in crime goes, “follow the money”.

Each transaction is recorded in a distributed public ledger and can thus be tracked, and anyone can download the entire transaction history for examination. A 2018 study by Elliptic and the Center on Sanctions and Illicit Finance, a US think tank, found a fivefold increase in the number of large-scale illegal operations working on the bitcoin blockchain between 2013 and 2016. They analysed the history of more than 500,000 bitcoins, identified 102 criminal entities and demonstrated positive links back to them.

Elliptic provides investigators, including the major government enforcement agencies and exchanges, software to screen transactions multiple times, checking for links to ransomware wallets, dark marketplaces and so on. The 24/7 nature of operations means rerunning analyses on older transactions can help trace updated suspect accounts. Dr Robinson estimates a trillion dollars’ worth of bitcoin transactions have been screened using its software since starting operations five years ago. He explains: “Blockchain is a concrete database of every transaction and address, so we can assign identities to those real-world identities, which law enforcement can then trace.” 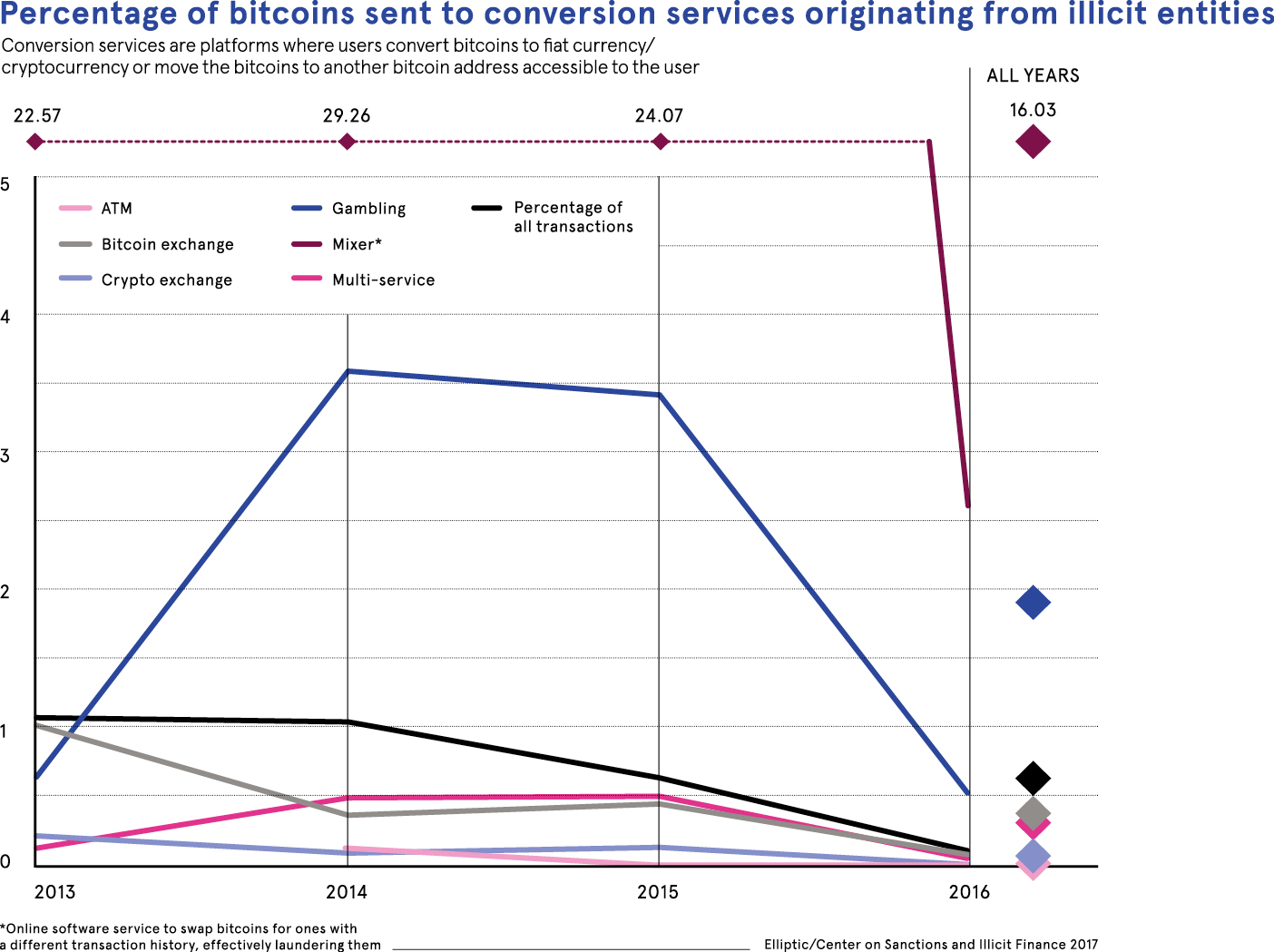 Regulation and tackling the impact of illegal use lies at the heart of making cryptocurrency mainstream. Matt Bisanz, financial services regulatory and enforcement associate at Mayer Brown in Washington, explains the reputation damage of cryptocurrency. “The situation is unsustainable,” he says. “The analogy is if there were daily bank robberies in New York, getting away with hold-ups. There was a time when this was common, in the wild west.

“We still have to put more in place to build confidence, where crimes are rare or have little effect on the consumer. When you get your credit card stolen, you don’t stop using it. It has low impact. Until crypto gets to a similar level, where people are not losing these sums of money, there will always be a question mark.” However, Mr Bisanz concludes: “The safeguards and protections will come; they will inspire confidence.”

Once we have integrity in the technology and the trading process then markets will be much safer. Dr Kirilenko is confident about the future. He says: “There is a lot of ingenuity coming into the crypto space, which is really encouraging. What is extremely positive is the amount of development talent that goes into it, which is very significant and suggests to me crypto assets have a high probability of succeeding in the long term.”

Like poachers turned gamekeepers, the academic researchers who helped create the encryption and software systems that made bitcoin possible are now helping law enforcement to detect criminal activity.

These experts operate at the crossroads of computer science, economics and forensics. Academic centres across the world, from Imperial College London to the University of Sydney, are using artificial intelligence (AI) to identify crypto transactions linked to criminal behaviour.

Startups like Chainalysis and Elliptic are putting AI and machine-learning tools into the hands of law enforcement agencies to anaylse profiles, cluster addresses and detect patterns.

Dr Andrei Kirilenko, of Imperial College Business School, says: “Detection is critical, but it is also what blockchain excels in, and the use of AI is enhancing this forensic work.”

XRP takes back 6th spot as SOL crashes by over 30%