Coin Hub News
Home Ethereum As Ethereum reinvents itself, large enterprises start to get on board –...

Investors are pouring a lot of money flow into bitcoin, but participants in the cryptocurrency market may be missing the real story: Ethereum is about to reinvent itself, and the impact could have far-reaching consequences throughout the enterprise world.

Released in 2015, Ethereum has grown to become the second-largest cryptocurrency by market capitalization. It differs from bitcoin in that it powers an increasingly popular smart contract system and facilitates the building of decentralized applications or DApps on the blockchain which appeals to developers. A recent report by Electric Capital found that Ethereum leads all cryptocurrencies in the number of active developers, with four times as many per month as bitcoin.

Despite predictions by a number of financial technology participants that it would overtake bitcoin, Ethereum has yet to live up to its promise. It has been plagued by issues of scalability, security and performance while its overall value has lagged far behind the premier cryptocurrency.

However, the Ethereum community has been working to introduce the first key phase of Ethereum 2.0 by early next year, a new version designed to reshape the protocol dramatically and resolve a number of its issues. An update on the current status of this highly anticipated rollout and an overview on the state of Ethereum was provided at the BuildETH gathering of developers, entrepreneurs and stakeholders in San Francisco on Friday.

It was less an attempt to sugarcoat the obvious and more about a realistic assessment of the hard work that lies ahead.

“Ethereum is still a very immature platform,” said Grant Hummer, co-founder of Chromatic Capital. “It’s pretty clear to me that we have a long way to go when it comes to mainstream user adoption. But I’m massively optimistic about Ethereum in the long term.”

Ethereum 2.0 could go a long way toward resolving concerns about user adoption. The platform will move to the Casper Protocol, a highly complex method of digital transaction best explained here. The key differences are moving from proof-of-work, the bitcoin model, to proof-of-stake, which will improve efficiency and security. The other is the use of sharding, a form of database partitioning designed to speed processing and expand scalability.

Last month, Ethereum announced that the 2.0 integration of the proof-of-stake phase will launch on Jan. 3, 2020. The date was not arbitrarily selected: It’s a sly dig at the leading cryptocurrency as the date is also the 11th anniversary of the original bitcoin Genesis block.

A central question on attendees’ minds at BuildETH was whether the first-phase launch would stay on schedule. In a presentation on Friday, Alex Stokes of the Ethereum Foundation declined to address this directly.  And in an exclusive interview with SiliconANGLE at the conference, Stokes was careful to say that Jan. 3 was the earliest possibility.

“That’s as a minimum,” Stokes said. “We wouldn’t have it before then. Even that date could change.”

Ethereum’s fitful journey is running in parallel with another key development: Despite the platform’s issues, enterprises continue to get on board. Earlier this year, there was a report that Samsung Electronics Co. Ltd. was developing its own custom blockchain based on Ethereum, and in June the Polish bank Alior announced that it would use Ethereum to authenticate and secure clients’ sensitive documents. 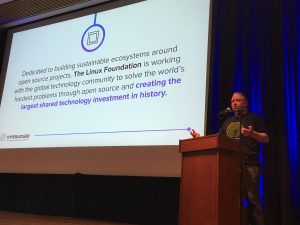 “There was a need for something like Enterprise Ethereum Alliance that a company like JP Morgan could hang its hat on,” said Hyperledger Executive Director Brian Behlendorf.

Behlendorf’s organization has been actively engaged with Ethereum in other ways. Hyperledger Burrow, a modular blockchain client with a permissioned smart contract interpreter, was partly developed to the specifications of the Ethereum Virtual Machine.

And Hyperledger Fabric, described by Behlendorf as “the first enterprise blockchain tech to be deployed on every major cloud,” began supporting Ethereum in October.

“Mapping the world of Ethereum to the world of Fabric has been an interesting exercise,” Behlendorf said. “Enterprises are starting to realize there is this full spectrum.”

Focus on developers and DApps

Behind enterprise interest in the Ethereum blockchain is a developer community attracted to the open-source project development opportunities offered by Hyperledger and potential uses for decentralized applications. Ethereum developers remain the largest creators of decentralized finance or DeFi applications and DApps, based on research from Binance released last month.

The result is a steady stream of DApps making their way into use. OpenLaw automates legal contracts. Etherisc is a decentralized insurance protocol covering events like flight delays and hurricanes. And 0x allows developers to add exchange functionality for a number of use cases, such as book ordering or decentralized loans, by adding a few lines of code.

“Ethereum’s core developer community is quite strong,” Hummer told attendees on Friday. “They come so they can build cool stuff that they think will change the world.”

Much is riding on the release of Ethereum 2.0 as the cryptocurrency world moves uncertainly into 2020. It’s a tricky proposition to couple a new system onto an active public blockchain, yet it’s the kind of gamble that increasingly appears to be part of the fabric driving the cryptocurrency space. Hummer himself once described losing $1 million in a day and feeling “OK” about it all.

“In my opinion, investors are the least important part of the community,” Hummer said during BuildETH. “It depends on developers and users.”

… We’d like to tell you about our mission and how you can help us fulfill it. SiliconANGLE Media Inc.’s business model is based on the intrinsic value of the content, not advertising. Unlike many online publications, we don’t have a paywall or run banner advertising, because we want to keep our journalism open, without influence or the need to chase traffic.The journalism, reporting and commentary on SiliconANGLE — along with live, unscripted video from our Silicon Valley studio and globe-trotting video teams at theCUBE — take a lot of hard work, time and money. Keeping the quality high requires the support of sponsors who are aligned with our vision of ad-free journalism content.

If you like the reporting, video interviews and other ad-free content here, please take a moment to check out a sample of the video content supported by our sponsors, tweet your support, and keep coming back to SiliconANGLE.

CFTC Chair Who Called Ethereum a Commodity Steps Down – Decrypt