In a recent article from The Washington Post, Bitcoin (BTC-USD)(COIN)(OTCQX:GBTC) was called a Total Disaster. The Author of this piece, Matt O’Brien cites the high price volatility, price manipulation, and the insanity of Libertarians who seem to believe that it’s possible to live in a society without trust.

I’ll save my criticism for now. In fact, let’s run with this idea. To tell you the truth, there are a lot of things going on right now in the cryptocurrency space that are real issues, big issues. If you’re an investor, then you should care about managing risk. After all, it was Warren Buffett who said:

The problems with Bitcoin today

Bitcoin is not an investment for the risk averse. In fact, for many people; investing at this stage might not make sense at all. Here’s why:

The list goes on, and there are no shortage of skeptics on television and on the internet who could add to this. If you’re interested, check out this book for even more detail.

While all this is going on, the Intercontinental Exchange (ICE) , Starbucks (SBUX) and Microsoft (MSFT) are hatching a company called Bakkt to try and take Bitcoin mainstream. Cryptocurrency mining company Bitmain, just announced plans for an $18 Billion dollar IPO, with a valuation somewhere between $40 and $50 Billion. The World Bank announced plans to launch the first bond based on Bitcoin technology, and Goldman Sachs (GS) ponders allowing cryptocurrency custody services for their clients.

It’s clear that consensus around Bitcoin and blockchain has yet to be reached. If all the magic was in the blockchain, then what’s the fuss about Bitcoin anyway? After all, the Bitcoin blockchain is public information, and the code is open source.

I’d like to suggest again, like I have in the past that there may be something special about Bitcoin; something that makes it more than the sum of its parts (at least those that can be copied and pasted). In fact, I think it’s possible Bitcoin is part of another trend that’s been taking us by storm already, the rapid expansion of technology.

Let’s talk about computing for a moment.

Many of you have heard of Moore’s Law. Gordon Moore, who was the Chairman of Intel noted sometime in the mid 60’s (or 70’s depending on the source) that the number of transistors you could fit into a single microprocessor was increasing at a predictable rate; in fact it was doubling nearly every two years (which means computers were running four times as fast).

And indeed, when we look at the price/performance of computing over the last 80 years (yes, going back even before modern computers), we see a chart that looks like this.

Does this blow your mind? It should; because it implies that unless something changes (like we hit a limit in the size of object that we can manipulate, this will happen eventually), we can actually make a reasonable guess about the cost of a single MIP at some time in the future (millions of instructions per second).

Sure, technology is progressing, but why is the rate predictable?

Ray Kurzweil expanded on this, by creating the Law of Accelerating Returns.

An analysis of the history of technology shows that technological change is exponential, contrary to the common-sense “intuitive linear” view. So we won’t experience 100 years of progress in the 21st century — it will be more like 20,000 years of progress (at today’s rate). The “returns,” such as chip speed and cost-effectiveness, also increase exponentially.

Indeed, technology is being adopted faster than ever and the pace seems to be increasing.

I believe Bitcoin is an emerging phenomenon that is exhibiting these same patterns. You may have seen these charts before, but have a look at the Bitcoin hash rate and the number of Bitcoin wallets on blockchain.com again; bearing in mind the charts you just saw about advances in computing and technology adoption over the long term. 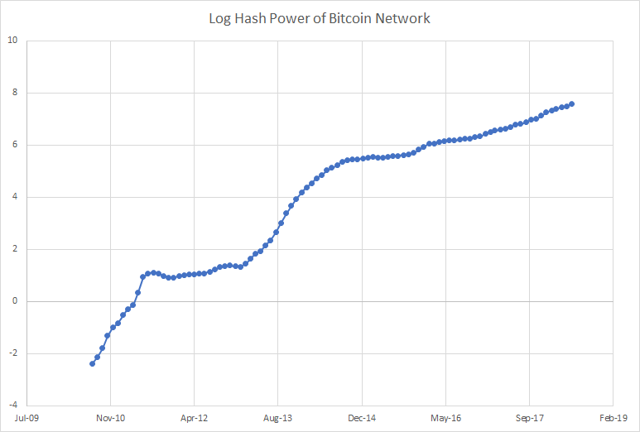 Here we see exponential growth over nine years, expansion in computing power, nodes, and CAPEX investment at scale. Bitcoin is the most powerful computing network on the planet, and has been since 2015.

In this chart we see one measure of network usage, the number of wallets created on a leading Bitcoin site, blockchain.com. The number of users has nearly doubled in the last year, adding 6 million wallets this year alone.

Maybe you’re thinking, “that’s great, but most of the growth came before the bubble popped in December/January. Now everyone is wandering off.” Well, in that case I urge you to look at the graph of the growth of the Bitcoin lightning network, which will raise the transaction capacity by several orders of magnitude (making it capable of competing with payment processing networks like VISA (V)).

It is my contention that the Bitcoin network must be evaluated first and foremost a rapidly growing technology. Much like the early days of the internet, scams abound and nobody is quite sure what to make of it yet.

However, based on the data, I think we’re dealing with powerful force here; the primary impact of which we are yet to witness. Bitcoin has no central planner, much like technology itself; and yet somehow it just keeps growing like a weed (or a sewer rat if you prefer).

I mentioned earlier that I would save my criticism of the “Bitcoin is still a total disaster” article. Here it is.

Bitcoin doesn’t care what you think. Bitcoin is not a company. Bitcoin lives in the wilds of the internet and it has taken on a life of its own. Additionally, Bitcoin is becoming more price stable all the time, even without a central planner; can you believe that?

In my last article there were many comments, and I tried to address as many as possible. However, there was one comment in particular I think needs to be brought to the forefront.

But to the extent that BTC bids to be a currency, then its value hinges on that equation, and the equation MUST be dealt with. – Lawrence J Kramer

The user in this case was referring to the theory of Monetarism, and their central equation MV=PQ. There are two things that need to be addressed here:

The Bitcoin network requires miners, software engineers, full nodes, users, and a network connection to reach consensus. Which one of these groups of people will stop participating if we can’t solve MV=PQ for Bitcoin? I hope you came to the answer of “none,” because that would be correct.

Economic theories are applied to real world problems in order to provide a framework for understanding the distribution of goods and services. It does not follow that if a new technology (even one that acts as a payment system) does not fit into MV=PQ, that it cannot possibly succeed. There are many ways in which Bitcoin could fail, this just isn’t one of them.

Bitcoin is a dangerous investment now, just like it was in the past. However, I think it’s possible that Bitcoin is powerful enough and strange enough to be a part of our future.

The emergence of Bitcoin was not an isolated event that came out of nowhere. Rather, I believe it is a logical (but unpredictable) component of a larger phenomenon that has been playing out for hundreds (or thousands) of years now; the technological evolution of our society.

Bitcoin could not have existed before this time in history, because it relies on and builds on top of technology that came before it, particularly communications technology such as the telephone, and the internet.

Even though the risks to the network are many, every day that passes without catastrophic failure takes us closer to a future that includes Bitcoin.

Have you heard that I’m launching a cryptocurrency/blockchain marketplace here on Seeking Alpha? It’s called Crypto Blue Chips, and we’re kicking off on September 1st. I’ll be covering which cryptocurrencies I’m investing in, and providing unique content. One such example is the BVIPE. If you like the Bitcoin Value Indicator, then you’ll love the Professional Edition, which will be available to Crypto Blue Chips subscribers. The BVIPE has 20x as many data points and gets updated every week. I hope to see you there.