– Some important altcoins are at prime levels 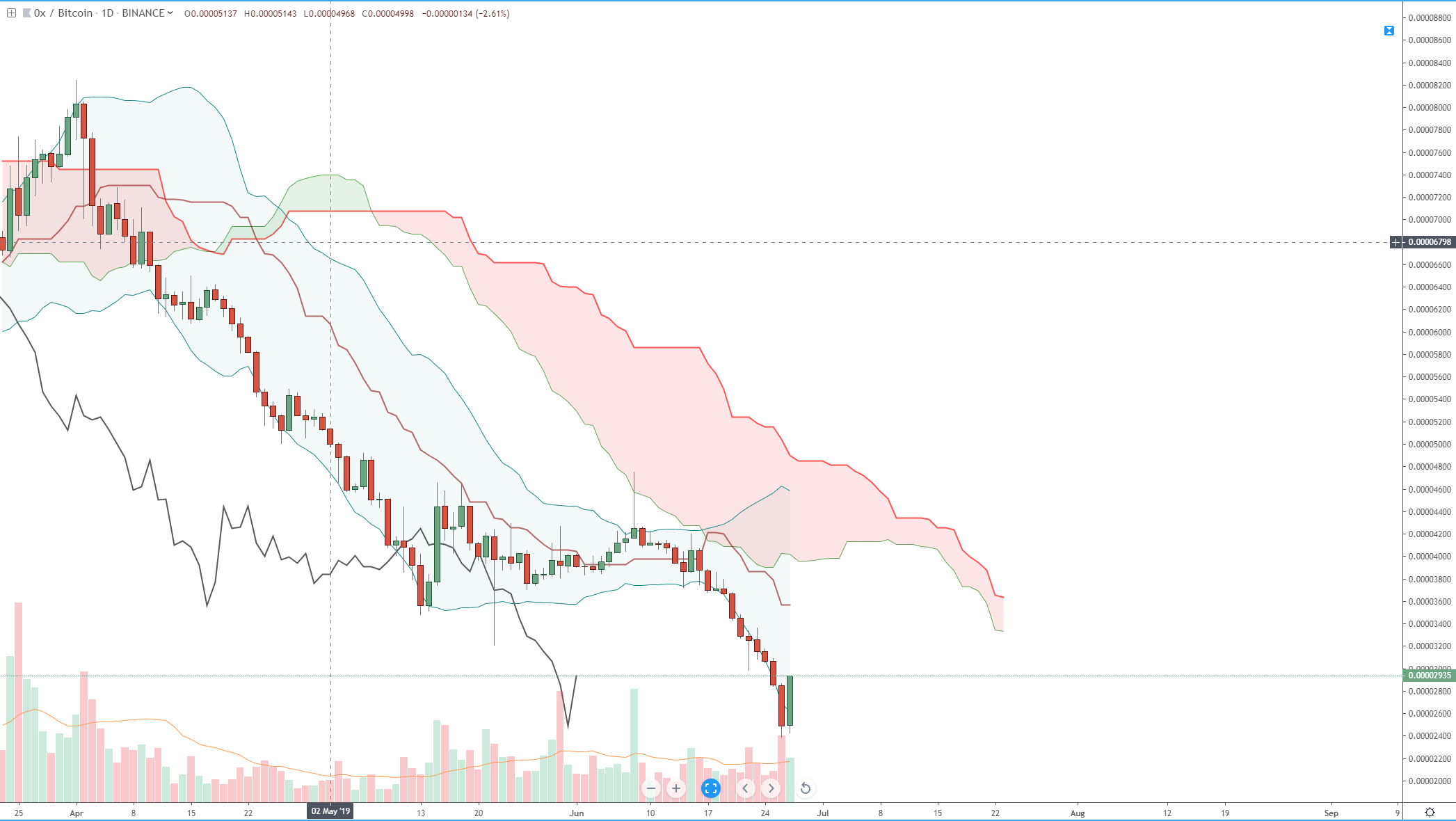 0x’s chart is one ugly chart. One of the ugliest out there. From its most recent swing high made on April 1st, 2019, 0x has spent 87 days moving lower and wiping out -71.06% of its value against Bitcoin. And while the massive drop against Bitcoin is nasty, altcoins like 0x are going to benefit. At the time of writing this article, 0x is up more than +17.67% against Bitcoin. The daily candle is a bullish engulfing candle with some massively strong volume behind it. Additionally, there’s a massive bounce off of the bottom Bollinger Band. 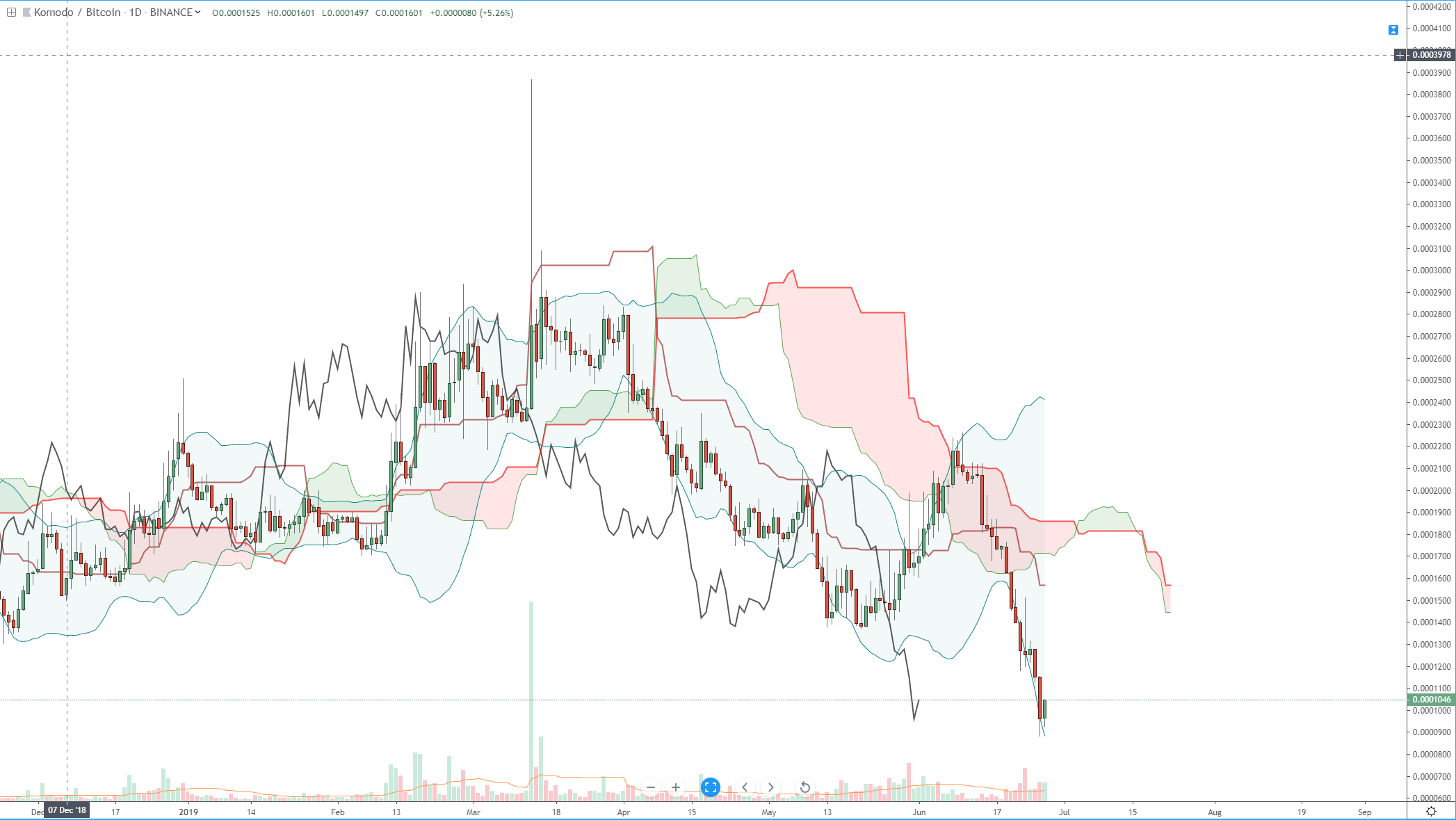 Komodo has a shared percent drop since its last swing high with almost every other cryptocurrency. But its most recent price action has been the most violent out of the majority of the top 40 altcoins. Komodo, over the past 16 trade days, dropped over -61.06% against Bitcoin. From its March 13th high, its moved down -77.24%. It’s currently up over 9% against Bitcoin and volume has been rising throughout the trading day. Komodo was lagging the aggregate altcoin market prior to today so it is a lead contender to outperform and lead any new altcoin rally. 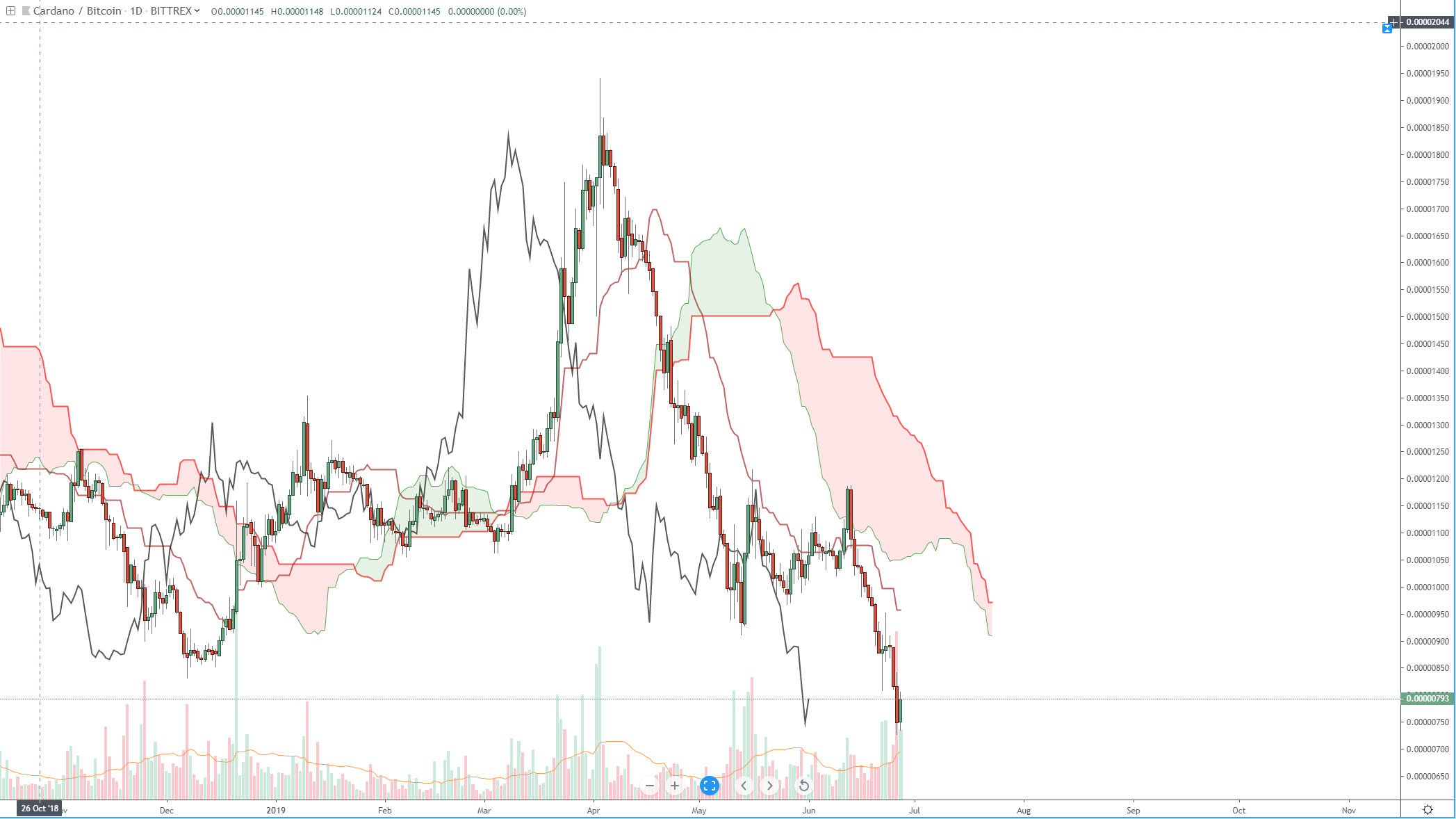 My personal favorite: Cardano. It’s had an equally ugly drive down by losing over -62.59% of its value over the past 85 days. But there is one thing Cardano has over almost every other cryptocurrency: volume. Cardano made a new low against Bitcoin yesterday, but it also made a brand new all-time high for volume. Over 603 million Cardano was traded on Binance alone. Cardano is lagging some of the altcoins in its rally, but I wouldn’t be to concerned about it. I like the present value here and I like the extreme distance Cardano is from its weekly Kijun-Sen. I also like how the volume has been rising over the past four weeks as it created new lows. Rising volume near a market bottom is indicative of a future reversal. 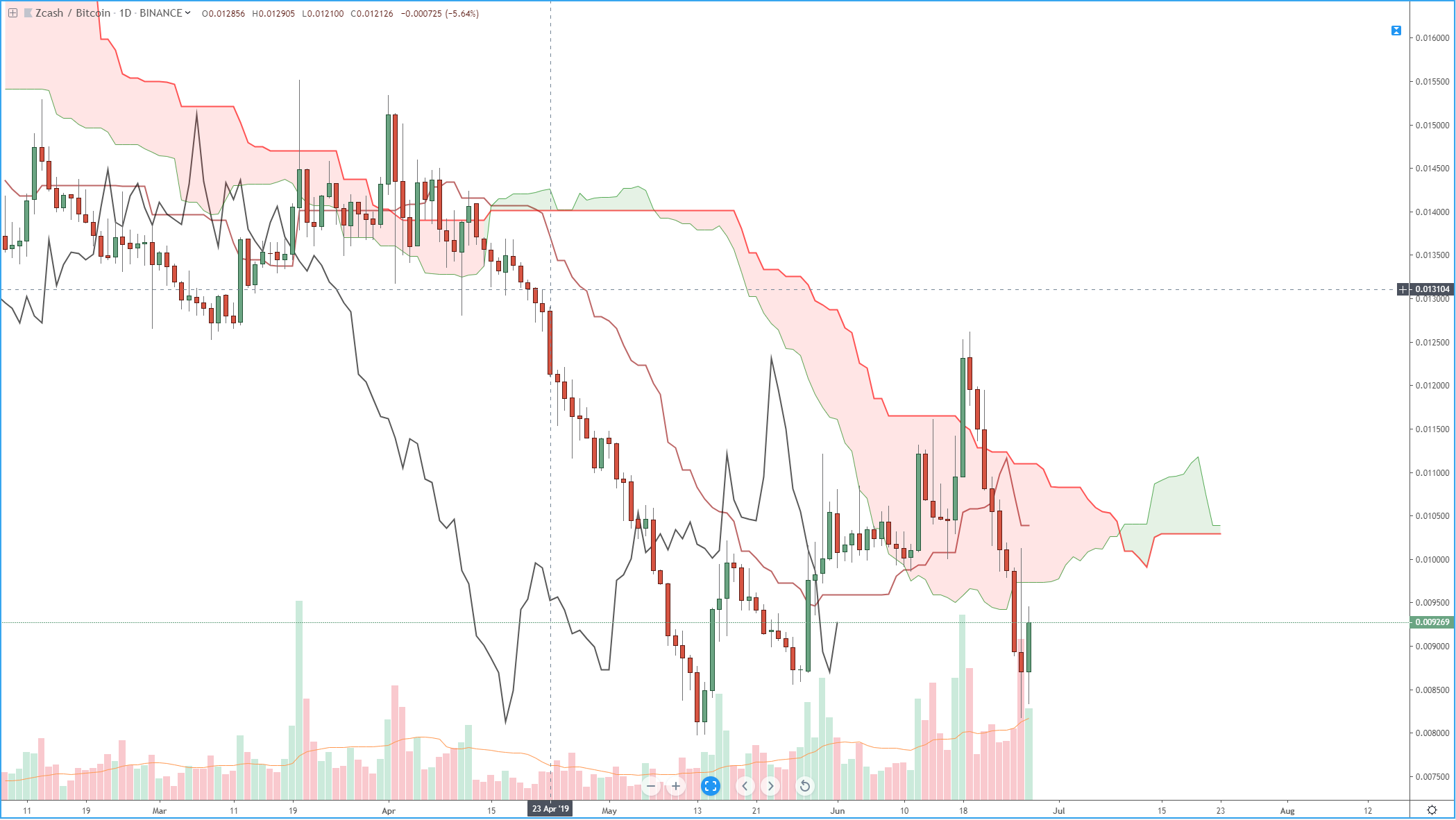 Zcash had some excellent performance against both Bitcoin and the US Dollar not very long ago. It was trading at 0.012614 back on June 19th but has since dropped down to 0.008166 – a -35.26% drop over just even days. But Zcash bucked the trend of creating new lows against Bitcoin, instead, it looks to have created a new higher low. At present, Zcash is trading almost +7% against Bitcoin and is experiencing a significant bounce. 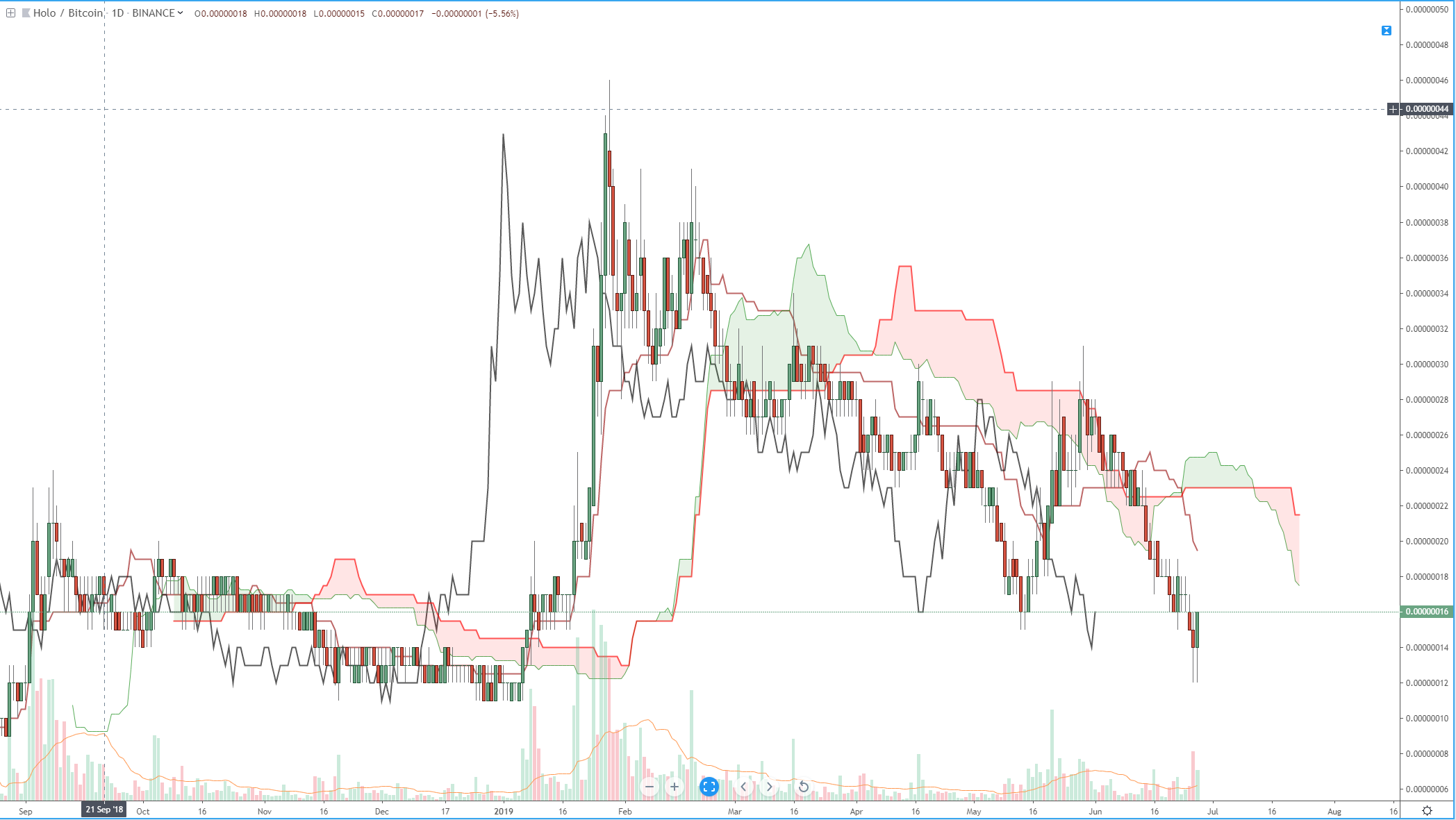 Holochain is one of the few cryptocurrencies that has not suffered as dramatically against the USD or Bitcoin during 2019. It’s actually created several instances of new all-time highs in its USD value. Its sitting right up against a powerful historical support zone and maintained that zone during Bitcoin’s massive run towards 14k as well as when it started to dump back towards 10k. There’s an excellent slingshot setup here and if we get some sustained momentum from this swing low to propel above the daily Kumo – we could see a tripling of its present value against Bitcoin.

Ethereum Classic news: things you need to know before investing in this cryptocurrency