In the middle of cryptocurrencies going mainstream and Craig Wright’s quest to become the “Founder” of Bitcoin, Bitcoin SV [BSV] stole the headlines for being the best performing major coin in the cryptoverse. Bitcoin SV witnessed a massive jump of 26.37% in trading value within 2 hours, stealing Tether’s [USDT] position on CoinMarketCap. It was ranked 8th in the list of the world’s largest cryptocurrencies, according to market cap.

While no particular development has been linked to the surge, many experts have speculated that the spike is driven by Wright’s decision to sell $50,000 worth BTCs and reinvest it into BSV. However, there has been no confirmation of the same, with Dovey Wan suggesting that this may have been fake news. Previously, Wright and his entourage had also hinted that a piece of great news would be revealed, during their recent convention in Toronto.

Bitfinex is currently facing accusations of fraudulent business practices, but BSV’s bull run has turned the game in favor of the controversial Craig Wright and the questionable exchange.

On the other side of the crypto-ecosystem, Ethereum [ETH], the top performing altcoin, also posted consistent gains in light of Bitcoin’s consolidating market. The crypto recorded 6.40% growth in its trading volume, over 24 hours. ETH was being traded at $282.45 at pres time, with Ethereum community members coaxing the altcoin t breach the $300 mark. 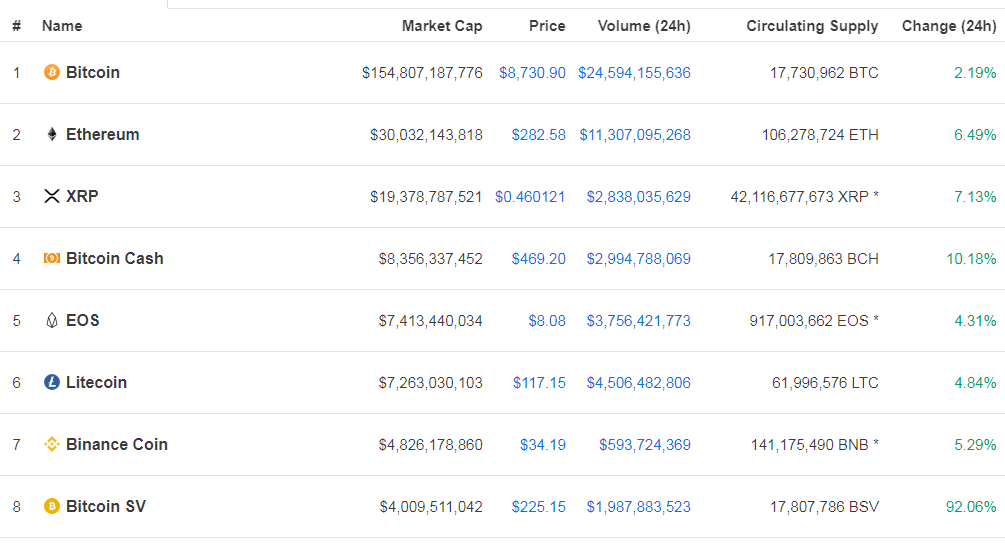 While the actual reason behind Bitcoin SV’s fantastic hike remains a mystery, the news only adds to the cryptocurrency market’s unique selling point. At the same time however, some have also raised concerns about BSV’s growth, stating that its delisting episode made the coin easy to manipulate. Whatever the case, the fact that the crypto-market has consolidated its gains over the past two months, suggests some modicum of stability in the market.